Queendom is at the intersection of contemporary performance, physical theatre and drag shows. It is based on structured improvisation where the audience’s presence becomes the co-creator of a performance that takes a different shape every night. It displays female and male representations from the Renaissance up to today’s pop culture.

Veronika Szabó’s theatre performance, Queendom is at the intersection of contemporary performance, physical theatre and drag shows performed by 8 women. It is about female representations and the power of the male gaze.

“… One might simplify this by saying: men act and women appear. Men look at women. Women watch themselves being looked at… Thus she turns herself into an object – and most particularly an object of vision: a sight.” John Berger, Ways of Seeing, 1973

Eight creatures, eight female bodies. Virgins, queens, thinkers, mothers and warriors. They appear for you and through you. Your imagination brings them to life and they are ready to take back what is theirs.

Queendom is at the intersection of contemporary performance, physical theatre and drag shows. It is based on structured improvisation where the audience’s presence becomes the co-creator of a performance that takes a different shape every night. It displays female and male representations from the Renaissance up to today’s pop culture. It presents roles, projecting them onto each other until their contours fade, allowing the audience’s gaze to redraw them. We explore what kind of roles and attitudes women take on because of female visual representations and male gaze. It is a comic and visceral show challenging our views on the female body.

The performance is a result of an intimate and collaborative process. The team is diverse group in terms of nationality, sexual orientation and views on the female body. There are German, American, Polish and Hungarian performers in the cast. Veronika Szabó was very interested how the creative process would affect the performers and how they could experiment with roles and attitudes of gender. 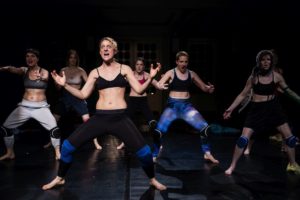 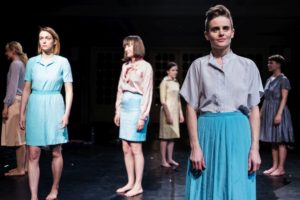 “It presents standard female roles but puts them straight into quotation marks with brilliant gestures and jokes. Actually this is how it is in our life, shows the cloven hoof: we are not virgins, sculptures, bitches, queens or birth canals. We are ourselves but it is hard to find ourselves amongst these preferred roles. They say that women have bad sense of humour especially feminist women. But Veronika Szabó is in direct contradiction to this stereotype.” (Panni Puskás: Cross-dressing, Szinhaz.net http://szinhaz.net/2017/12/05/puskaspanni-cross-dressing/ )

Veronika Szabó is a freelance actor, director and community theatre facilitator. She has graduated in the MA Advanced Theatre Practice at the Royal Central School of Speech and Drama, London studying physical theatre and contemporary theatre practices. Before that she studied Applied Theatre at Goldsmiths University. She was member of the London Clown School and from 2019 she is member of the Red Nose International Clown Network. In her theatre performances (Warpaint (2015), The baby (2016), The Timestealers (2016), Queendom (2017), Animal City (2018), Dino Coming Out (2018) she usually breaks the 4th wall, creating playful, comic and visceral shows. She often invites the audience to play as well. She works around topics of identity, female body, the grotesque and humanimal behaviours. She has created site specific theatre and headphone theatre performances too. Her show, Queendom has won the Award from the Audience at Thealter Festival. Her works have been presented at theatres and festivals in the UK, Germany, Czech Republic, Serbia, Romania, Kosovo. She has also directed several community theatre shows and regularly runs drama and theatre workshops for communities, young people as well as for professionals. In 2016 she worked as a presenter in the comedy-documentary TV programme ‘Immigrant’s Guide to Britain’ on Channel 4. She is member of the international post-species poppunk band, Maria Inkoo and a Hungarian band, Neonnutria.

Előző
Következő
VERONIKA SZABÓ: QUEENDOM
Scroll to top
Accepting or rejecting cookies used by our site is easy, you just have to choose one of the following two linksI accept cookiesI do not accept cookies.Privacy policy