Nibiru is a creative process created by Zsófia Tamara Vadas dancemaker, Ábris Gryllus media artist and Márton Emil Tóth fine artist. The performance is presented by children, who were deeply involved into the creative process.

’Gleamy mucosa drew up against the blue islands connecting your empires. The wind whirled aluminium parts, and you were running away from the volcano sliding on plastic shield. But it didn’t erupt, it just murmured down under. The shopping malls were swallowed by your lands like melting rubber and the aluminium debris slicked into the wall of the planet. It had a sliver glitter in the distance. glittered in silver in the distance. From far away we could see the grass turning into yellow dust and then falling into the air following your footsteps. You were waiting for Nibiru but we arrived too late. And now we are looking for the last river whose plane is like the mirror. We crossed it by jumping from turf to turf to reach the house from which we can still see the sky. There are just few of us in the middle of the rock field. We build a library from stones, our clothes are dried by the crimson wind and we curl our hairlocks on small tubes before going to bed.’

Nibiru is a creative process that is based on presumptions and visions and that draws conclusions about the future of mankind and the Earth. Tamara Zsófia Vadas, Ábris Gryllus and Márton Emil Tóth are working with children on a project that will be presented by children.

The legends says that Nibiru is the tenth planet of the solar system, which when crashing into Earth will end the forms of life as we know them now. Starting from this presumption the performance explores what else could happen on Earth after this. Real and fictitious worries about the planet, uncertainties of childhood and the rituals of becoming adults are put in a playful, fantastic frame. Instead of being fearful, this time the end of the world is a territory of dreams and utopia. Nibiru offers the possibility of revival in a world after humankind, where prejudice and reclusion must be replaced by creativity and spontaneous action. 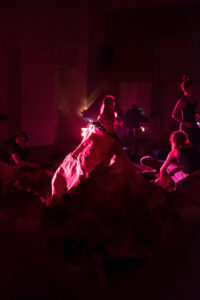 Előző
Következő
VADAS-GRYLLUS-TÓTH: NIBIRU
Scroll to top
Accepting or rejecting cookies used by our site is easy, you just have to choose one of the following two linksI accept cookiesI do not accept cookies.Privacy policy