In 2022 SÍN Arts Centre has launched its programme THE GAP, a participatory funding scheme, which is for now a unique, innovative solution in Hungary.

What is participatory funding?
It is a collective name for a bunch of various solutions for funding with the core idea that the decision making power about grants is ceded to the very communities impacted by the funding decision.

How is this principle manifested in THE GAP?
In 2022 SÍN Arts Centre, which is active in the independent contemporary performing arts scene, published a grant scheme of about EUR 8.000 in an open call. According to the call all applicants read each application. The SÍN colleagues developed the decision making process, its framework and moderated it based on validated group facilitation methods – they did not take part in the decision making itself. The community of the applicants – in 2022 there were 36 of them – spent a day together and granted support to five programmes of varied financial support, the amount of which was part of the applications. It was an exciting and uplifting day both for the participants and the SÍN staff. We learnt an awful lot form each other, about the empowering sensation of a democratic and transparent decision making process.

Why have we developed THE GAP?
We had various direct and indirect objectives:
– To get familiar with, develop and promote alternative funding models (not only) for the Hungarian performing arts scene
– To give opportunity to artists, who are predominantly grant application writers, to read and evaluate applications
– Experimentation with new forms and solutions of non-hierarchical systems
– Enhance responsibility taken for one another
– Encouragement of openness to collaboration, experiencing it even in a competitive situation – we believe it’s possible
– Betterment of debate culture
– Learning about, promoting democratic, transparent decision making processes
And through all this the empowerment of the civil society

What have we learnt in the first year?
First of all we learnt that we had devised something important, special, which resonated with a great number of people at a high level – even if for now just in our close professional vicinity. This has strengthened our intention to continue and further develop THE GAP in 2023.
If a process is thoroughly planned, all its details are shared with those involved in it and it is carried out consistently it will create a safe space in which all participants can remain curious, supportive and cooperative.
A decision behind which the arguments and the considerations are clear for all participants – even if it’s not necessarily beneficial for everybody on an individual level – will acceptable and supportable for the whole community.

In January 2022 SÍN has launched its new programme, an adaptation of the various international good examples of participative funding schemes in the arts.

The scheme is relatively simple. We published an open call in a total sum of approximately EUR 9.000 to artists and art workers in the independent performing arts field. The applicants are asked to submit project ideas and respective budget – for either artistic or any other project that support the development of the independent scene.
After the closure of the open call we share all applications amongst the applicants, they have about 3 weeks to get familiar with all the ideas.

In the end of February they decide about how to divide the available fund within a day. First they make a mutual decision about the criteria according to which they evaluate the proposals. Then each applicant has a chance to present the project idea. Once this is done we’ll have the decision through discussions and voting. The applicants shall decide about the number of supported projects and the amounts awarded to each project to the extent of the full available budget. The process is supported by various group facilitation methodologies. SÍN is only responsible to provide the framework for the decision making, our colleagues have no input into the discussion and the decision making. The whole duration of the decision making day shall be livestreamed on the SÍN social media channels for a greater transparency.

In December 2022 we gather again to learn about the development, completion of all the supported projects and work on the improvement of the GAP process together with the participants.
It is an experiment – both for us and the Hungarian independent performing arts field. Later in the year we shall conduct a campaign to win more supporters for the initiative so that in 2023 we start the second round with a higher budget and experience from the first edition.
It is our ambition to learn, develop, fine-tune the GAP programme together with the participants and all interested parties. We aim at flexibly adapting it to the needs in the field in a continuous learning curve about participatory funding.

The main objectives of GAP are the following: 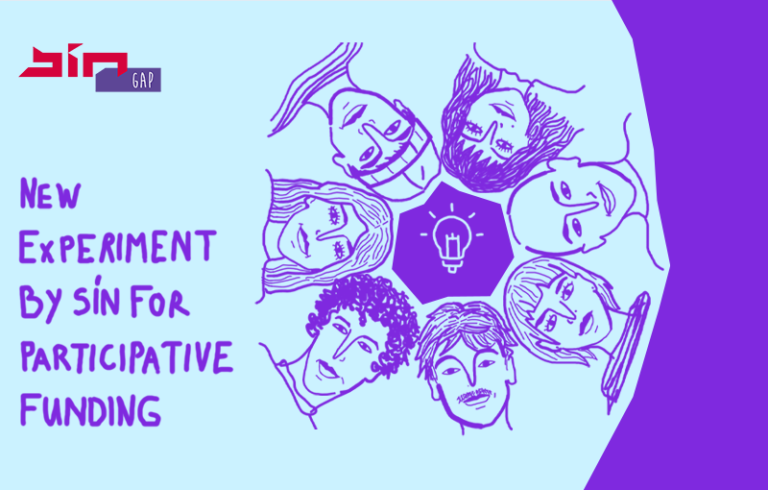